I worked in human resources for almost fifteen years at a number of different companies, including a religious-based organization where one of my duties was to teach people how to be appropriate and professional. Yes, I do see the irony in this.

Human resources is the place where people come to complain and/or shoot people when they just can’t take it anymore. Choosing to work in HR is like choosing to work in the complaint department of hell, except way more frustrating, because at least in hell you’d be able to agree that that Satan is a real jerk without having to toe the company line. The HR department is the place where people stop by to say, “THIS IS TOTALLY MESSED UP,” and the HR employees will nod thoughtfully and professionally as they think to themselves, “Wow. That is totally messed up. I wish that this person would leave so I could tell everyone else in the office about it.” 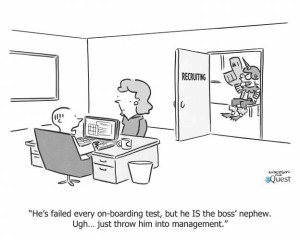 When I was in HR, if someone came to me about a problem, I’d excuse myself and bring in a coworker to take notes, and the employee would relax a bit, thinking, “Finally, people are taking me seriously around here,” but usually we do that only so that when you leave we can have a second opinion about how insane that whole conversation was. “Was that stuff as crazy as I thought it was?” I would ask afterward. It always was. Sadly, HR has very little power in an organization, unless the real executives are on vacation, and then watch out, because a lot of people are going to get fired.

There are three types of people who choose a career in HR: sadistic jerks who were probably all tattletales in school, empathetic (and soon to-be-disillusioned) idealists who think they can make a difference in the lives of others, and those of us who stick around because it gives you the best view of all the most entertaining train wrecks happening in the rest of the company.

Last month we decided to start keeping file of the most horrific job applications handed in so that we’d have something to laugh at when the work got to us. We now officially have twice as many applications in the “Never-hire-these-people-unless-we-find-out-that-we’re-all-getting-fired-next-week” file than we have in the “These-people-are-qualified-for-a-job” file. What’s the word for when something that started out being funny ends up depressing the hell out of you? Insert that word here.

Today a woman came in to reapply for a job. She wrote that she’d quit last month but now wanted her job back. On “reason for leaving” she wrote: “That job sucked. Plus, my supervisor was a jerk.” She was reapplying for the exact same job. I rehired her and reassigned her to her old supervisor, because I totally agreed with her. That guy was totally a jerk.

In the last two months, six separate men filled in the “sex” blank on their job application with some variation of “Depends on who’s offering.” Two answered, “Yes, please,” and one wrote, “No, thank you.” I hired the last one because he seemed polite.

This afternoon an applicant wrote that she’d been fired from her job at a gas station for sleeping on a cat. Everyone in the office read the application, but none of us could agree on what the hell she was talking about, so we brought her in for an interview. When I asked her about falling asleep on her cat she looked at me and indignantly replied, “What? I never wrote that.” Then when I showed her the application she said, “Car. My boss found out I was sleeping on a car. Duh. Why would my boss care if I slept on a cat?”

“Because I was the only person working that shift. But I totally would’ve heard if anyone had driven up. I’m a very light sleeper. It’s not like I didn’t have a plan.”

The lesson here is that sometimes you get brought in for an interview just to settle a bet.

Previous Post: Top Firms for Women for Equity and Power
Next Post: 5 Minutes Early Is On Time; On Time Is Late; Late Is Unacceptable