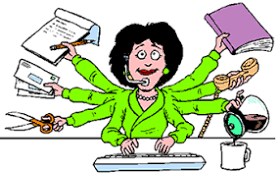 THE 1950s and ’60s brought many new things to American offices, including the Xerox machine, word processing and — perhaps less famously — the first National Secretaries Day, in 1952. Secretaries of that era envisioned a rosy future, and many saw their jobs as a ticket to a better life.

In 1961, the trade magazine Today’s Secretary predicted that, 50 years hence, the “secretary of the future” would start her workday at noon and take month-long vacations thanks to the “electronic computer.” According to another optimistic assessment, secretaries (transported through office hallways “via trackless plastic bubble”) would be in ever-higher demand because of what was vaguely referred to as “business expansion.”

But nearly 60 years later, on the date now promoted as Administrative Professionals Day, we’re living through the end of a recession in which around <a title="Times article about job losses in the recession" two million administrative and clerical workers lost their jobs after bosses discovered they could handle their calendars and travel arrangements online and rendered their assistants expendable. Clearly, while the secretary hasn’t joined the office boy and the iceman in the elephant’s graveyard of outmoded occupations, technological advancements haven’t panned out quite the way those midcentury futurists imagined. There are satisfactions to the job, to be sure, but for many secretaries, it remains often taxing, sometimes humiliating and increasingly precarious.

New technologies did make the lives of 20th-century secretaries easier. By the 1920s the typewriter had cemented women’s place in the outer office, and later versions made for faster, less strenuous typing (“Alive After Five!” was the way a 1957 ad put it). The introduction of the Xerox 914 photocopier in 1959 did away with the laborious routine of carbon copies.

But even from the start, the relationship between secretaries and technology was fraught. One turn-of-the-last-century secretarial guidebook offered the cautionary tale of a secretary who refused to learn how to use an early transcribing recorder called a “business phonograph,” and was promptly replaced by a younger stenographer, at $3 more a week.

As early as 1966, with the introduction of the first computerized word-processing system (I.B.M.’s Magnetic Tape Selectric Typewriter), secretaries were worrying that machines could replace them. They no longer had to retype a page because of a dropped letter — but would they be relegated to a “space-age typing pool” that offered little opportunity for advancement?

Indeed, that has come to pass, in good ways and bad, as some secretaries have moved from physical offices to virtual ones. Commenting on this newspaper’s Web site in 2008, one virtual assistant named Barbara Saunders claimed that the cyberoffice, where “symbols of social rank” like corner offices have no meaning, might upend the hierarchy of boss and staff once and for all. “For those of us who have always found the rank-based social system distasteful, the loss of ‘the office’ is liberating,” she wrote.

It’s interesting, then, to note that reinforcing these “symbols of social rank” has often been one way secretaries tried to keep their jobs from becoming obsolete. Back in 1961, a past president of the National Secretaries Association told The Los Angeles Times that secretaries should cheerfully perform menial tasks like emptying ashtrays because that was their “security against being replaced by a computer.” That same year, Life magazine joked that the voice-activated typewriter “wasn’t likely to automate any secretaries out of their jobs very soon,” as — here it mimicked the machine’s inability to translate spoken language into properly spelled English — the “klumsi masheen kan nivver make kawfi.”

Coffee has long been a flashpoint for strong emotions about the differences between service and servility in offices; in the 1970s, when the second wave of feminism began to undo the traditional dyad of male boss and female secretary, more than one secretary was fired for refusing to make, fetch or serve coffee. In Los Angeles in 1973, one Leonor Pendleton was fired for “incompetence, insubordination and failure to comply with job instructions” after refusing to make coffee. Two years later, a Manhattan secretary was fired 20 minutes after she refused to get “four regulars” from a nearby coffee shop for a man who stopped her in the hallway — and turned out to be a vice president of the company.

This sort of thing still happens today. In 20-some years as an office worker, I’ve made coffee when the pot has run dry, asked clients if they’d like a cup, and picked up an extra for my boss when getting myself one. But others have it harder. “I don’t have a problem getting coffee and/or water for our guests,” wrote Tamara Klopfenstein, a clerk and receptionist, in an e-mail to her two male bosses in 2007. But she wasn’t willing to “serve and wait on you by making and serving you coffee.” She would be “happy to sit down and talk” about the matter, but she never got the chance. Nine minutes after hitting send, she was fired.

Secretaries of today and 60 years ago would probably agree on something: the one technological advancement they wish existed never will. After all these years, a human being still needs to plug in Mr. Coffee and deliver his output. But that won’t save an administrative assistant’s job from the maw of computerization. Secretaries can only hope that bosses won’t take the human in question for granted, a sign that not everyone will be celebrating this Administrative Professionals Day.

Previous Post: Is Patton Boggs on fire — and not in a good way?
Next Post: The Ways Your Coworkers Know More About You Than Your Friends Do